The Arduino Due is the first Arduino board based on a 32-bit ARM core microcontroller. With 54 digital input/output pins, 12 analog inputs, 2 DAC and 2 CAN it is the perfect board for powerful larger scale Arduino projects. 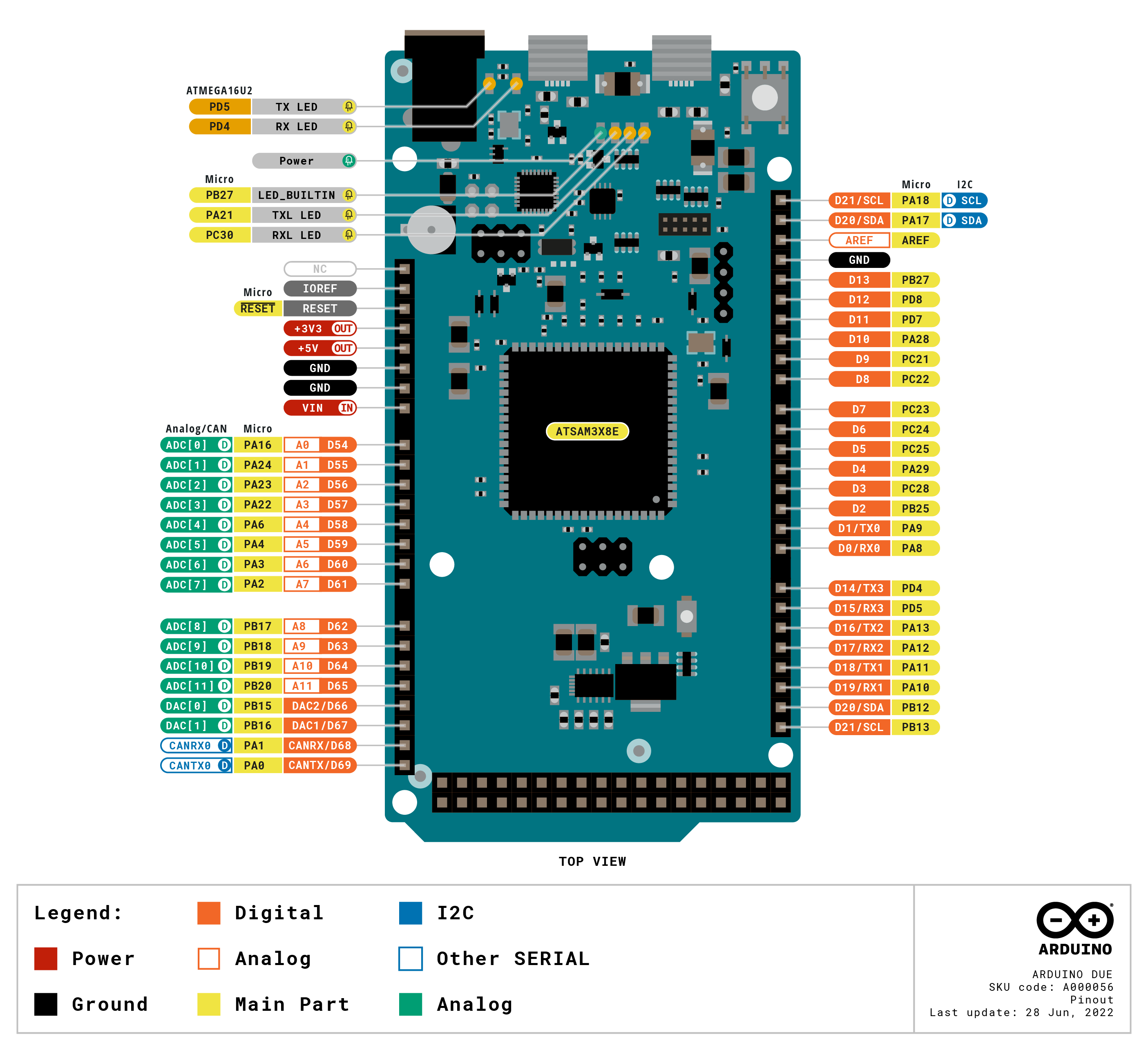 The Arduino Due is a microcontroller board based on the Atmel SAM3X8E ARM Cortex-M3 CPU. It is the first Arduino board based on a 32-bit ARM core microcontroller. It has 54 digital input/output pins (of which 12 can be used as PWM outputs), 12 analog inputs, 4 UARTs (hardware serial ports), a 84 MHz clock, an USB OTG capable connection, 2 DAC (digital to analog), 2 TWI, a power jack, an SPI header, a JTAG header, a reset button and an erase button.
Atmel SAM3X8E ARM Cortex-M3 CPU

Based on the ARM® Cortex®-M3 processor, this 32-bit microcontroller has 84 MHz clock and 96kb of SRAM.

The Due has 54 digital pins, 12 of which support PWM (Pulse Width Modulation).

The Arduino Due features a barrel plug connector, that works great with a standard 9V battery.

The Due comes with two CAN (Controller Area Network) buses.

Here you will find the technical specifications for the Arduino® Due.

The following software tools allow you to program your board both online and offline.

Quickstart Guide
All you need to know to get started with your new Arduino board.

Extended SPI Library Usage with the Arduino Due

The SAM3X has advanced SPI capabilities. It is possible to use these extended methods, or the AVR-based ones.

This example shows how to drive a DC motor in forward and backward directions, using the Arduino Due and Motor Shield.

This example demonstrates the use of the KeyboardController library.

Use the Arduino Due as a USB host for a mouse.

The Scheduler library allows the Arduino Due to manage multiple tasks at the same time.

Due
Scheduler
Simple Waveform Generator with Arduino Due

Generate waveforms by using the Arduino Due and its DAC features

Use the Arduino Due as a USB host for a keyboard.

In this tutorial you will update the ATmega16U2 firmware using an Arduino UNO or Mega as an AVR-ISP (in-system programmer).

Interact with the schematics, the PCB and a 3D model of the product.

A diagram showing the functions and the arrangement of the pins on your product.