Use a potentiometer to control the blinking of an LED.

In this example we use a variable resistor (a potentiometer or a photoresistor), we read its value using one analog input of an Arduino board and we change the blink rate of the built-in LED accordingly. The resistor's analog value is read as a voltage because this is how the analog inputs work. 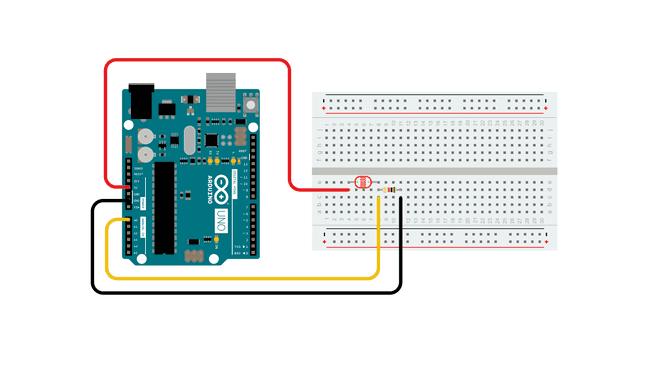 For this example, it is possible to use the board's built in LED attached to pin 13. To use an additional LED, attach its longer leg (the positive leg, or anode), to digital pin 13 in series with the 220 ohm resistor, and it's shorter leg (the negative leg, or cathode) to the ground (GND) pin next to pin 13.

The circuit based on a photoresistor uses a resistor divider to allow the high impedance Analog input to measure the voltage. These inputs do not draw almost any current, therefore by Ohm's law the voltage measured on the other end of a resistor connected to 5V is always 5V, regardless the resistor's value. To get a voltage proportional to the photoresistor value, a resistor divider is necessary. This circuit uses a variable resistor, a fixed resistor and the measurement point is in the middle of the resistors. The voltage measured (Vout) follows this formula: 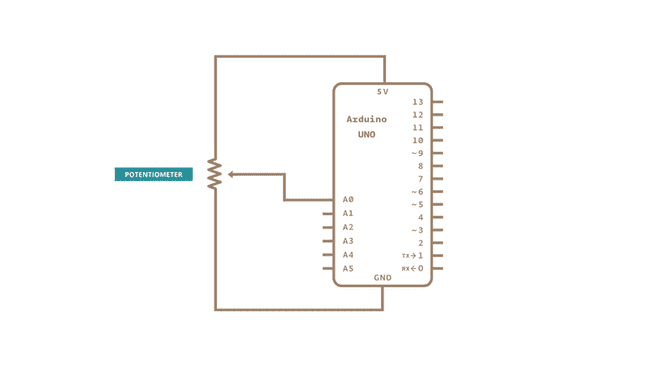 At the beginning of this sketch, the variable

is set to to analog pin 0, where your potentiometer is attached, and is set to digital pin 13. You'll also create another variable, to store the values read from your sensor.

command converts the input voltage range, 0 to 5 volts, to a digital value between 0 and 1023. This is done by a circuit inside the microcontroller called an analog-to-digital converter or ADC.

returns 0. When the shaft is turned all the way in the other direction, there is no resistance between the center pin and the pin connected to +5 volts. The voltage at the center pin then is 5 volts, and returns 1023. In between, returns a number between 0 and 1023 that is proportional to the amount of voltage being applied to the pin.

That value, stored in