Overview of the Arduino IDE 1

The Arduino Integrated Development Environment - or Arduino Software (IDE) - contains a text editor for writing code, a message area, a text console, a toolbar with buttons for common functions and a series of menus. It connects to the Arduino hardware to upload programs and communicate with them. 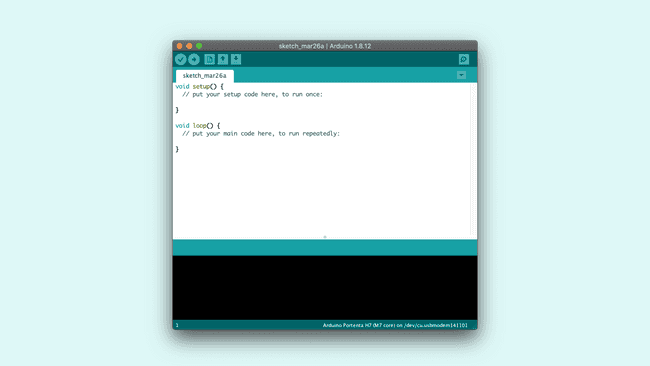 Programs written using Arduino Software (IDE) are called sketches. These sketches are written in the text editor and are saved with the file extension .ino. The editor has features for cutting/pasting and for searching/replacing text. The message area gives feedback while saving and exporting and also displays errors. The console displays text output by the Arduino Software (IDE), including complete error messages and other information. The bottom righthand corner of the window displays the configured board and serial port. The toolbar buttons allow you to verify and upload programs, create, open, and save sketches, and open the serial monitor.

NB: Versions of the Arduino Software (IDE) prior to 1.0 saved sketches with the extension .pde. It is possible to open these files with version 1.0, you will be prompted to save the sketch with the .ino extension on save.

Verify Checks your code for errors compiling it.

Upload Compiles your code and uploads it to the configured board. See uploading below for details.

Note: If you are using an external programmer with your board, you can hold down the "shift" key on your computer when using this icon. The text will change to "Upload using Programmer"

Open Presents a menu of all the sketches in your sketchbook. Clicking one will open it within the current window overwriting its content.

Note: due to a bug in Java, this menu doesn't scroll; if you need to open a sketch late in the list, use the File | Sketchbook menu instead.

Save Saves your sketch.

Additional commands are found within the five menus: File, Edit, Sketch, Tools, Help. The menus are context sensitive, which means only those items relevant to the work currently being carried out are available.

Here you find easy access to a number of documents that come with the Arduino Software (IDE). You have access to Getting Started, Reference, this guide to the IDE and other documents locally, without an internet connection. The documents are a local copy of the online ones and may link back to our online website.

The Arduino Software (IDE) uses the concept of a sketchbook: a standard place to store your programs (or sketches). The sketches in your sketchbook can be opened from the File > Sketchbook menu or from the Open button on the toolbar. The first time you run the Arduino software, it will automatically create a directory for your sketchbook. You can view or change the location of the sketchbook location from with the Preferences dialog.

Beginning with version 1.0, files are saved with a .ino file extension. Previous versions use the .pde extension. You may still open .pde named files in version 1.0 and later, the software will automatically rename the extension to .ino.

Allows you to manage sketches with more than one file (each of which appears in its own tab). These can be normal Arduino code files (no visible extension), C files (.c extension), C++ files (.cpp), or header files (.h).

Before compiling the sketch, all the normal Arduino code files of the sketch (.ino, .pde) are concatenated into a single file following the order the tabs are shown in. The other file types are left as is.

Before uploading your sketch, you need to select the correct items from the Tools > Board and Tools > Port menus. The boards are described below. On the Mac, the serial port is probably something like /dev/tty.usbmodem241 (for an Uno or Mega2560 or Leonardo) or /dev/tty.usbserial-1B1 (for a Duemilanove or earlier USB board), or /dev/tty.USA19QW1b1P1.1 (for a serial board connected with a Keyspan USB-to-Serial adapter). On Windows, it's probably COM1 or COM2 (for a serial board) or COM4, COM5, COM7, or higher (for a USB board) - to find out, you look for USB serial device in the ports section of the Windows Device Manager. On Linux, it should be /dev/ttyACMx , /dev/ttyUSBx or similar. Once you've selected the correct serial port and board, press the upload button in the toolbar or select the Upload item from the Sketch menu. Current Arduino boards will reset automatically and begin the upload. With older boards (pre-Diecimila) that lack auto-reset, you'll need to press the reset button on the board just before starting the upload. On most boards, you'll see the RX and TX LEDs blink as the sketch is uploaded. The Arduino Software (IDE) will display a message when the upload is complete, or show an error.

When you upload a sketch, you're using the Arduino bootloader, a small program that has been loaded on to the microcontroller on your board. It allows you to upload code without using any additional hardware. The bootloader is active for a few seconds when the board resets; then it starts whichever sketch was most recently uploaded to the microcontroller. The bootloader will blink the on-board (pin 13) LED when it starts (i.e. when the board resets).

Libraries provide extra functionality for use in sketches, e.g. working with hardware or manipulating data. To use a library in a sketch, select it from the Sketch > Import Library menu. This will insert one or more #include statements at the top of the sketch and compile the library with your sketch. Because libraries are uploaded to the board with your sketch, they increase the amount of space it takes up. If a sketch no longer needs a library, simply delete its #include statements from the top of your code.

There is a list of libraries in the reference. Some libraries are included with the Arduino software. Others can be downloaded from a variety of sources or through the Library Manager. Starting with version 1.0.5 of the IDE, you do can import a library from a zip file and use it in an open sketch. See these instructions for installing a third-party library.

To write your own library, see this tutorial.

Support for third-party hardware can be added to the hardware directory of your sketchbook directory. Platforms installed there may include board definitions (which appear in the board menu), core libraries, bootloaders, and programmer definitions. To install, create the hardware directory, then unzip the third-party platform into its own sub-directory. (Don't use "arduino" as the sub-directory name or you'll override the built-in Arduino platform.) To uninstall, simply delete its directory.

For details on creating packages for third-party hardware, see the Arduino Platform specification.

This displays serial sent from the Arduino board over USB or serial connector. To send data to the board, enter text and click on the "send" button or press enter. Choose the baud rate from the drop-down menu that matches the rate passed to Serial.begin in your sketch. Note that on Windows, Mac or Linux the board will reset (it will rerun your sketch) when you connect with the serial monitor. Please note that the Serial Monitor does not process control characters; if your sketch needs a complete management of the serial communication with control characters, you can use an external terminal program and connect it to the COM port assigned to your Arduino board.

Since version 1.0.1 , the Arduino Software (IDE) has been translated into 30+ different languages. By default, the IDE loads in the language selected by your operating system. (Note: on Windows and possibly Linux, this is determined by the locale setting which controls currency and date formats, not by the language the operating system is displayed in.)

You can return the software to its default setting of selecting its language based on your operating system by selecting System Default from the Editor Language drop-down. This setting will take effect when you restart the Arduino Software (IDE). Similarly, after changing your operating system's settings, you must restart the Arduino Software (IDE) to update it to the new default language.

The board selection has two effects: it sets the parameters (e.g. CPU speed and baud rate) used when compiling and uploading sketches; and sets and the file and fuse settings used by the burn bootloader command. Some of the board definitions differ only in the latter, so even if you've been uploading successfully with a particular selection you'll want to check it before burning the bootloader.

Arduino Software (IDE) includes the built in support for the boards in the following list, all based on the AVR Core. The Boards Manager included in the standard installation allows to add support for the growing number of new boards based on different cores like Arduino Due, Arduino Zero, Edison, Galileo and so on.