The Wireless SD shield allows an Arduino board to communicate wirelessly using a wireless Xbee module or similar plus a micro-SD card slot
LAST REVISION: 08/10/2022, 01:26 PM

The Arduino Wireless SD Shield allows an Arduino board to communicate wirelessly using a wireless module. It is based on the Xbee modules from Digi, but can use any module with the same footprint. The module can communicate up to 100 feet indoors or 300 feet outdoors (with line-of-sight). It can be used as a serial/usb replacement or you can put it into a command mode and configure it for a variety of broadcast and mesh networking options. The shields breaks out each of the Xbee's pins to a through-hole solder pad.

Included on board is a SD card slot. When using the SD Library to access the card, Pin 4 is CS and cannot be used otherwise. SPI also relies on pins 11, 12, and 13 for communication.

An on-board switch allows the wireless module to communicate with the USB-to-serial converter or with the microcontroller.

Arduino Wireless SD Shield is open-source hardware! You can build your own board using the following files: 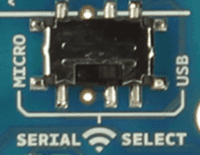 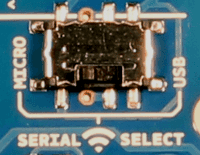 The Wireless SD shield can be used with different modules with the same footprint as the XBeemodules. The instructions below are for the XBee 802.15.4 modules (sometimes called "Series 1" to distinguish them from the Series 2 modules, although "Series 1" doesn't appear in the official name or product description) and also for the XBee ZNet 2.5 or XBee ZB modules, both known as "Series 2" modules. All the modules, basically have the same type of configuration parameters, but differ by the function that they implement and the topologies of networks that they can create. Can communicate with each other only modules of the same family.

Here are a couple more useful commands for configuring the XBee module (you'll need to prependAT to these too).