This tutorial demonstrates how to make use the 6-axis IMU to read the X, Y, and Z values of both the accelerometer and the gyroscope.
AUTHOR: Arduino
LAST REVISION: 05/23/2022, 08:12 AM

The CurieIMU library uses the IMU (accelerometer + gyroscope) built into the Arduino 101. 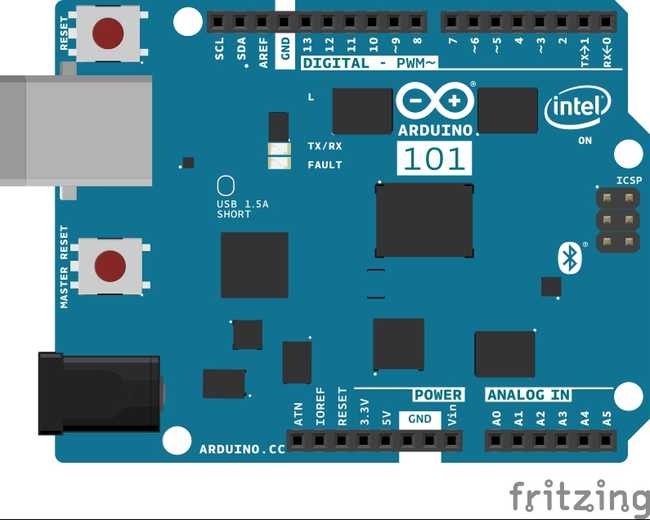 The Madgwick filter algorithm is open-source and is well documented in Madgwick's information and reports. The Madgwick filter algorithm was developed by Sebastian Madgwick during his Ph.D. in 2010 and is designed to be computationally inexpensive and efficient even at low sampling rates. The algorithm takes raw values from a gyroscope and accelerometer, and uses them to return four quaternions, which are 4-dimensional numbers which contain x, y, and z values to represent the axis around which rotation occurs, as well as a ω value which represents the value of rotation which occurs around the same axis. These quaternions can be used to calculate the Euler angles pitch, yaw, and roll; three angles used to describe the orientation of a rigid body in terms of x,y, and z as presented by Leonhard Euler in the 1700s. The equations (7) (8) (9) in Madgwick's Report are used to calculate the values for pitch, roll, and yaw, and their functions are included within the library.

We can create a 3D representation of the Arduino 101's onboard IMU in Processing, which will move as the board does. This is achieved with the values for Euler angles pitch, roll and yaw obtained by the Madgwick filter algorithm. These values can then be sent via Serial to Processing and used as angle arguments for Processing's to compute the position of the Arduino 3D model using the methods: applyMatrix(), pushMatrix(), and popMatrix() functions.

The sketch uses functions inside the CurieIMU library to get the data from the accelerometer/gyro.

In order to see a 3D representation in Processing, the Arduino sketch must incorporate two main functionalities; using the IMU data and algorithm to calculate yaw, pitch, and roll values, and enabling serial communication in a handshake fashion in order to send those values to Processing.

First, we must create a Madgwick object to access the functions from the Madgwick class in the library. Here, we call it filter:

function we perform a preliminary configuration of the CurieIMU, by setting the sample rate of the acelerometer and the gyro and the filter to 25Hz:

Then we set the accelerometer range to 2g and the gyro range to 250 °/s:

function we will need to send a sample according to the sample rate we set for the CurieIMU reading:

We can then 'get' accelerometer and gyroscope data using the following functions from CurieIMU library and convert the raw data to acceleration (g) and angular velocity (°/s):

We can then use the function updateIMU() from the Madgwick library.

After that, we are ready to obtain from the filter the roll, pith and yaw values:

These values are sent 25 times per second over the serial port to the Processing application.

As seen in the code, the gyroscope values have been scaled down by a variable factor so that they fit into a range which works well with the algorithm. Without this scaling, the values which are inputted to the function are too high and the visualization of the movement of the board becomes very sensitive to small changes of the 101's position, interpreting a slight change as a great change and causing the 'virtual' board to spin.

The full code can be found at the bottom of the page.

Note that the serial prints for gx,gy,gz,ax,az,ay are left in loop in comments for debugging and must be commented whilst communicating with Processing.

If you haven't already, the first thing to do is to download the latest version of Processing from processing.org. Processing is a language similar to Arduino which allows the user to draw dynamic imagery in the familiar

and structure. For more information on using Processing, please visit their Getting Started guide.

, , and , which are then used to compute the transformation matrix which moves the 3D model of the Arduino board.

To enable Processing to read from the same port that Arduino is sending to, myPort needs to be changed to your serial port's name. In setup(), this is the Second parameter of Serial.

The correct port can be found by using the list() function from the Serial class. The number inside the square brackets refers to the number of the serial port and will be 0, 1, 2, etc. The sketch works if you have just one COM port active on your machine. As an alternative, you could specify directly the "COMx" port of the 101 board - the one used to program from Arduino Software (IDE) the 101 board - commenting this line

and uncomment of the lines corresponding to your OS:

You must replace the port string with the correct name for your COM port.

If in doubt, you can print a list of your available serial ports in a separate sketch to determine this name.

The function serialEvent() is then used to receive and parse data.

This reads from the serial port until ASCII character 13 (new line) and then uses the split() function to separate the values using the comma character. Since we know that we sent from Arduino in the order yaw, pitch, roll, we can then convert each string to a float and assign them to the first three values in String array list[]. The strings are then converted into floats and stored in float variables. The full Arduino and Processing sketches can be seen below.