Control an 8x8 matrix of LEDs.

LED displays are often packaged as matrixes of LEDs arranged in rows of common anodes and columns of common cathodes, or the reverse. Here's a typical example, and its schematic: 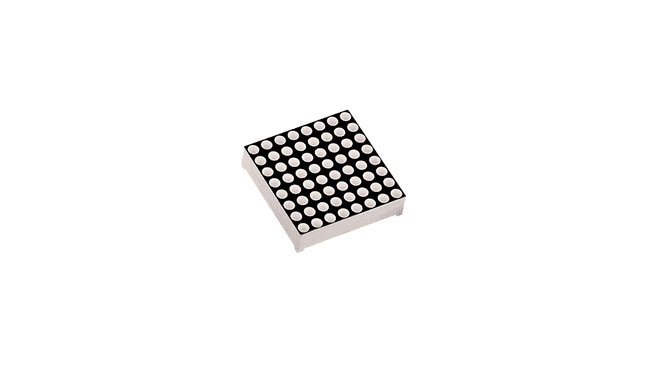 These can be very useful displays. To control a matrix, you connect both its rows and columns to your microcontroller. The columns are connected to the LEDs cathodes (see Figure 1), so a column needs to be LOW for any of the LEDs in that column to turn on. The rows are connected to the LEDs anodes, so the row needs to be HIGH for an individual LED to turn on. If the row and the column are both high or both low, no voltage flows through the LED and it doesn't turn on.

Although there are pre-made LED matrices, you can also make your own matrix from 64 LEDs, using the schematic as shown above.

It doesn't matter which pins of the microcontroller you connect the rows and columns to, because you can assign things in software. Connected the pins in a way that makes wiring easiest. A typical layout is shown below.

Here's a matrix of the pin connections, based on the diagram above:

The 16 pins of the matrix are hooked up to 16 pins of the Arduino board. Four of the analog pins are used as digital inputs 16 through 19. The order of the pins is assigned in two arrays in the code.

Two potentiometers, connected to analog pins 0 and 1, control the movement of a lit LED in the matrix.

To keep your LED matrix from burning, add 8 10kΩ resistors to the wires connected in yellow in the image below.